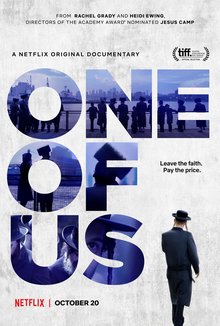 We hosted a private screening of One of Us a couple of nights ago for Forward members. It was followed by a very lively discussion, with both negative and positive feedback. These ideas are my perspective and takeaways.

For many of us who’ve lived through the struggles of leaving the ultra-Orthodox world, One of Us was a challenging documentary to watch. For me, I recognized the struggles of my peers who’ve struggled with many of the same issues. For others, it was a sore and open wound. Yet for others it was a struggle to identify with these deeply negative experiences.

Of those who choose their own path to freedom, after having lived as Hasidic or ultra-Orthodox, there are some who manage the transition smoothly. Although their parents and community don’t accept their lifestyle, choices and decisions, there is a tolerance or a preservation of a certain status quo. This is portrayed to a larger degree in Leaving the Fold, where the cultural relativism plays a more central role.

One of Us plays to a very different tune – it takes some of the tougher experiences and tries to show how difficult it is to make the break. The 3 characters suffer from very different socio-economic challenges, all directly linked to their pasts. There’s the community action against Etty – the character assassination, malicious treatment of her children in the name of religion, being followed and attacked, and the physical abuse. There’s the long term trauma of community displacement that Luzer feels, even though he’d seen shorter term success. And Ari, who while not out of his teens, suffers and has to go at it alone.

All of these negative experiences can happen in the secular world. People battle with their native communities. People lose their communities. People find themselves alone in the world. But the sheer scale and frequency with which it happens to those who try to leave the ultra-Orthodoxy is appalling. A community thats pits a mother against a daughter. Or Luzer could not speak to his family for many years. Or Ari was never given the education that should’ve been guaranteed by the law of the land. What is hardest to swallow is that these are all young, smart and ambitious people who are only looking to enjoy very basic freedoms, yet obstacles are placed in their paths.

The idea as to who we are when we leave the fold is a challenging one. Are we Canadians (or Americans)? Being part of the “us” in Canada would mean being protected, we should feel like when we walk down the streets, we are all treated as free. We live in a country where we expect that our basic rights, of freedom, community and education are (or should be) guaranteed. That is what makes us a nation. But this is denied to those who aren’t happy in their ultra-Orthodox community.

Rather than leaving and having access to a supportive and vibrant ideal of an “us” or community, we are left with the negative pressures of dealing with a community that may actively reject us. Without community, those who leave are left to their own devices in a stressful state, of which it’s hard to gauge if the social and psychological has a deeper toll. We are left dealing with guilt, being labeled, being ostracized – all because we wanted to read and write in English, taste a cheeseburger, explore liberal ideas and be allowed to question.

Like the 3 characters in the documentary, there are 100s if not 1000s of similar stories, of people who struggle to feel like they are at home and comfortable within their on their native country, who struggle to live well.

It is this that I think, while presented to one extreme in One of Us, is something I, as someone who perhaps had a more “smooth transition” recognize in myself.

Forward is a Montreal based non-profit organization that is dedicated to providing education, integration and support for those who’ve chosen to leave their ultra-Orthodox communities.

Make A Donation To Forward

We are a grassroots organization providing education, integration and support services to those leaving the ultra-Orthodoxy, providing our members the opportunity to be happy contributors to the community of their choice.

Make a donation to our 2018 fundraising campaign